Rajasthan is a very important tourist destination. To meet the day to day requirements of its fast paced life of inhabitants and tourists both national and international, the connectivity to other important cities is extremely important. The Rajasthan government has implemented all measures to make travelling hassel free. 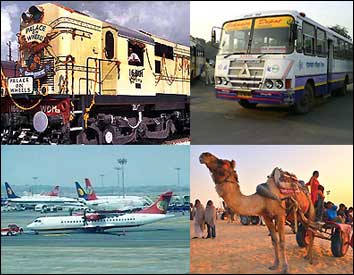 Rajasthan is the land of gigantic forts, beautiful 'Havelis' and majestic palaces. The architectural beauty, sand dunes and culture of Rajasthan attracts thousands of locals as well as foreign visitors. The six airports in Rajasthan receives many domestic and international flights every day. 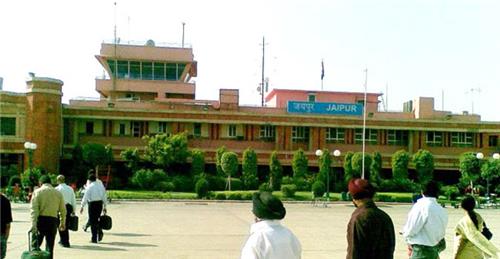 Out of all the six airports of Rajasthan, Sanganer airport is the only Customs Airports with limited international operations of Rajasthan. Both International carriers like Lufthansa, British Airways, Air-France, Royal Jordan, Alitalia, Kuwait Airways, Gulf Airways, Singapore Airlines, Thai Airlines, K.L.M., Cathay Pacific, East West Airlines and Domestic flight operators like Indian Airlines, Archana Airways, UP Air, Jet Airways, Air India, Modiluft operates their flights to the city. The runway is about 9,000 ft long. The two terminals of the airport are around 8 km from the main city.

This is the non-operational civil enclave of Rajasthan situated approximately 8 km from the main city. The single terminal airport is rather a small airport with capacity of only 20 arrival and departure. It is basically an important military base and also serves as civil airport during tourist season. Alliance Air, Indian Airlines, Indigo, Air Sahara, Spicejet, Jet Airways, Air Deccan and the Kingfisher airlines connects Bikaner with Delhi and Mumbai.

Kota is more important for business being  theindustrial capital of Rajasthan. The domestic airport of Kota is distanced 10 km from the main city. Comparatively small single runway is just 4000 ft long. However, the airport is non-operational since 1997 due to insufficient funds.

The domestic airport of Udaipur is named Maharana Pratap Airport after the ruler of Mewar- Maharana Pratap. It is located in Dabok, the town 22 km in the south of Udaipur so it is popularly known as Dabok airport.

The Jaisalmer domestic airport is primarily an Indian Air Force base. It is open for the civilians only from 1st October to 31st March. The airport has a runway of 9,000 ft and single terminal.

Rajasthan has network of 17 national highways covering 5,585 kilometers and 85 state highways extending to a length of 11,716 kilometers. The NH 8 stretching 688 kilometers is the most important one as it links important cities like Ajmer, Udaipur, Delhi, Jaipur, and Ahmedabad.

RSRTC was established on 1st October 1964 to provide intercity bus transportation in Rajasthan at low fares. It has its Head Quarters in Jaipur. The state Road Corporation has 48 depots all through Rajasthan. The air-conditioned and super deluxe buses between Jaipur and Delhi are very comfortable keeping in view importance of tourism.

Rajasthan Roadways is committed to provide efficient, economical and well coordinated transport service to the public.

Railways are one of the most important means of transport in Rajasthan. Rajasthan is high on tourism map. Rajasthan’s mighty forts, magnificent palaces, placid lakes, crafty sand dunes and colourful cultural festivals magnetize tourists from far and wide. Many luxury trains also operate from here. 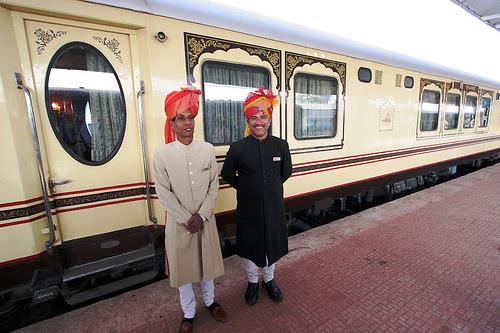 North Western Railway looks after the proper and regular running of trains in Rajasthan. NWR is one of the 15 railway zones which saw the inception on 1st October, 2002 with an amalgamation of Northern and Western Railways. The railway is divided into four divisions, namely, Ajmer, Bikaner, Jaipur & Jodhpur. There are total 578 railway stations.

To ensure the ease of passenger railways provide state of art facilities of online reservation through Computerized Passenger Reservation System Centres, PNR status enquiry, train status and many other useful information on below mentioned website.

Local transport of a city is what keeps the city moving all time. The cities of Rajasthan have well developed local transport system which enables easy movement within city limits. The cabs, cycle rickshaws, tempo, auto rickshaws, tonga, jeeps, city buses, camel carts and bullock carts are the common means of transportation locally.

Radio Taxi: Some cities have Radio Taxi or Cabs availability. They charge fare according to meter. These taxis on call are a great help to the tourists. The following cabs operate in Jaipur

Auto Rickshaws in Rajasthan
The mechanical three wheeled vehicle with a driver seating on front and passengers on rear seat makes an auto rickshaw a popular and common means of transportation. It is like a sharing auto rickshaw.

Prepaid booths are setup at Railway stations and Roadways bus stand in some towns so that any auto rickshaw don’t charge much money for a certain distance.

Cycle Rickshaws in Rajasthan
The three wheeled cycle rickshaw pulled manually is a cheap means to travel short distances. Not all cities of Rajasthan have hand pulled rickshaws.

Tempos in Rajasthan
It is larger than common auto rickshaw but smaller than mini-bus. Many cities or towns have tempos running on different routes of the city.

Tongas in Rajasthan
Tongas are pulled by horse. Now-a-days these are rarely seen on roads except small regional towns. These are also used to have exclusive experiences.

Local City Buses
The city buses run by Rajasthan State Roadways are the most common means of transport used by people. Buses charge a very nominal fare for carrying one to his or her destination. They don't have a fixed time schedule but operate on a regular basis.