* In case of any delay in receiving the OTP, you may verify it later. Please proceed without verification.

Famous Temples of Goddesses in Rajasthan

Famous Temples of Goddesses in Rajasthan

Rajasthan is one of the major states of India, and is on the western side sharing a border with the neighboring country of Pakistan. Rajasthan, although better known for its deserts, is also a religious place. It is home to some of the famous Hindu and Jain temples of Rajasthan. Rajasthan is a place of great heritage, with all their kings and queens and palaces. The heritage reflects on their temples as well. Most of the temples have an interesting background story attached to them about how and why the temple was established. While some of these temples are a big tourist attraction because of their presentation and publicity, others are prone to visits from religious devotees. It is interesting to see the number of temples in Rajasthan dedicated to Goddesses, and their popularity. Some of the most commonly worshipped Goddess temples of Rajasthan have been listed below. 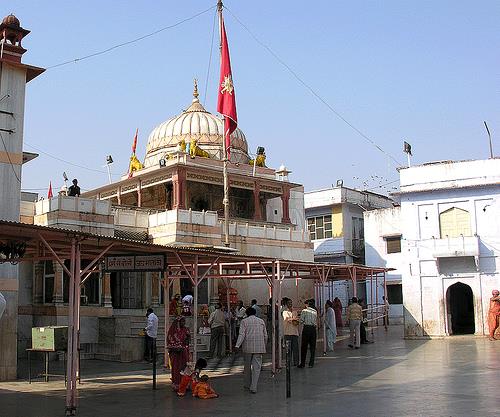 This is a temple dedicated to goddess Ambika, which is one of the forms of goddess Durga. This form is worshipped as Shakti, or a form of power, much like goddess Kali. The temple is located in jagat, a place that is about 50 kms away from the lake city of Udaipur. Although it is in such close proximity to a big city, this temple is never crowded. There are many inscriptions on this temple, some dating back to the 10th century. The oldest recorded inscription on this temple dates back to 961 AD. The temple is filled with images of not only Ambika and Durga, but of many other female divinities. Located on a cleft, this is one of the oldest temples of Rajasthan. It is interesting to note that there are connections of the temple to both Hinduism as well as Jainism, as a form of Durga and with an image of Ambika advising Vimala respectively. Presently, the temple is taken care by the State Department of Archaeology and Museum in Rajasthan. 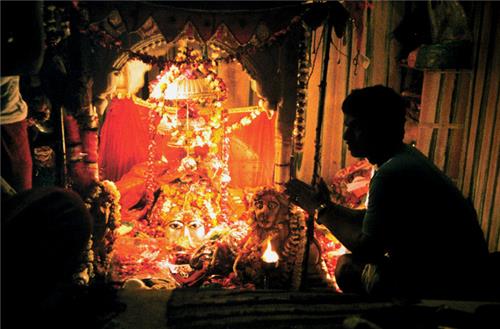 Built in the Bhadesar tehsil, which is a part of the Chittorgarh district, this is a temple dedicated to goddess Avari Mata in the village of Asawara. The temple is built within springs and hills. He place is believed to have special powers, that of healing paralysis and polio, and thousands of people visit this temple in an attempt to find a cure

The temple is dedicated to goddess Dadhimata. Dadhimata is believed to be the sister of Rishi Dadhichi. It is also believed that Dadhimata killed Vikatasura. Dadhimata is a form of goddess Laxmi. The temple was built in the 4th century and has some of the oldest inscriptions. This temple has the oldest recorded inscription about the goddess Mahamatya. It is a very famous temple, and is one of the Shaktipith. There are a total of 52 Shaktipith, where 52 parts of Goddess Shakti had scattered. So now there are 52 Shaktipiths spread around the whole of the Indian subcontinent, and the Dadhimata temple is one of them. The temple is situated in Goth Manglod village in the Jayal tehsil of Nagpur district of Rajasthan. Although it is quite remote, it is a very popular temple. The temple was originally established in the early Gupta era, and the present servants of the temple includes Parashar Brahmins. 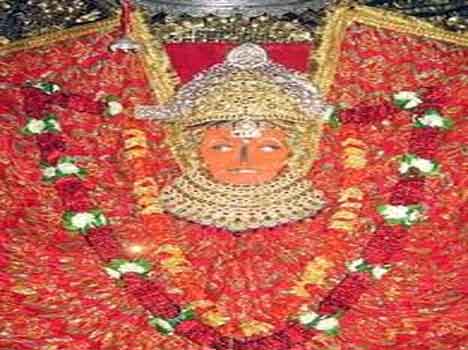 Jeen Mata temple is a famous temple in the village of Jeenmata. Although there is no record of when the temple was established, it is believed to be more than a thousand year old. Every year, during the months of Chaitra and Ashvin, many thousands of people gather here to celebrate Navaratri. It is a big event considering that the whole population of the village is a little more than 4,500. There is a long story, still unconfirmed, about why there is a temple established there.

The temple dedicated to Hindu goddess Kaila Devi is located in the Kaila Devi Village of the Karauli district. It is a fairly new temple compared to the other thousand year old temples in Rajasthan, but it is still a part of the heritage. The temple is situated on the banks of Kalisil River, where people bathe before offering their prayers in the temple. The temple is made of marble, and has a huge courtyard with checkered floor. On one side of the courtyard there are a number of red flags. They have been put there by the devotees visiting the temple to mark their wishes. 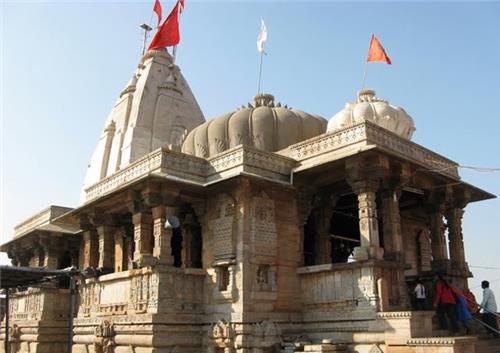 This is a part of the Chittorgorh Fort in Rajasthan. One of the oldest temples in Rajasthan, the base of the temple was established in the 8th century. However, the upper parts of the temple have been built more recently. The deity of the temple, Goddess Kalika Mata is one of the many forms of goddess Bhadrakali, a goddess of shakti. The temple is fairly popular and has thousands of devotees pouring in one a regular basis from all parts of the world. 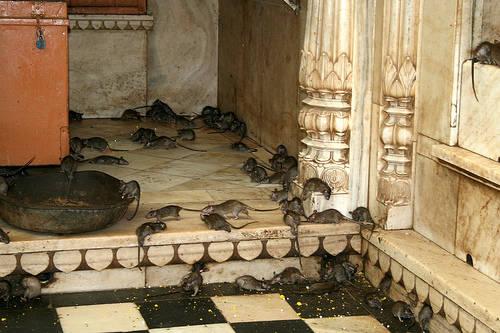 Located at Deshnoke, near Bikaner, the Karni Mata temple although dedicated to the goddess Karni Mata of the Hindu religion, is also often known as the temple of rats. Approximately 20,000 rats reside at the temple, and are considered to be holy rats. People from all around the country visit this temple to pay their respects not only to the goddess Karni Mata but to the rats as well. It is believed that eating the food that has been nibbled on by the rats is a big honor and might even cure diseases. There are a few interesting stories as to why the rats reside there. Some say that Laxman, the son of Karni Mata, died and then Yama reincarnated him along with other three sons of Karni Mata as rats. Another popular story says that 20,000 soldiers fled from a battle nearby and came to Deshnoke. They were to be killed for the sin of deserting a battle, but instead they were allowed to live as rats. Whatever be the reason, this is the only place in the world perhaps where rats are worshipped. Among the thousands of black rats, there are a few white rats as well, and they are considered to have even greater and holier powers.

Kunjal Mata temple in the Jayal tehsil of Nagpur District of Rajasthan is like any other Hindu temple. It is dedicated to the Hindu goddess Kunjal Mata. However, there is something highly interesting about this temple. It has been built on a huge area, approximately 38 bighas. The temple and the surrounding area are huge and thus the place has a significant importance as a historical tourist spot in Rajasthan. Kunjal Mata is the Kul devi of Pareek Brahmins. 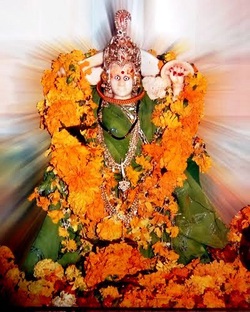 Nandni Mata Temple is dedicated to the Hindu goddess Nandni Mata or Nandini Mata. Nandini Mata is a form of goddess Durga, and the literal meaning of the term Nandini is daughter. Like all other forms of goddess Durga, Nandini Mata is also highly worshipped during the time of Navratri. Another form of Nandini Maa, known as Mahakali Pavagadh, is worshipped in Hujarat, Vagad. In Vagad, Mahakali Pavagadh is not only a Hindu goddess, but is also affiliated to Jainism and Budhism. Nandini Mata is also known as Nandore Ma in the Vagadi language, that is the language in Vagad, Gujarati. Nandini Mata has been mentioned in much folklore, Vedic hymns and even in the book Durga Saptami. So this shrine has religious significance and does not arise simply from folklores. Even an adivasi dance ritual known as ‘garba’ which is fairly popular in Gujarat and the rest of the world, has been dedicated to Nandini Mata. 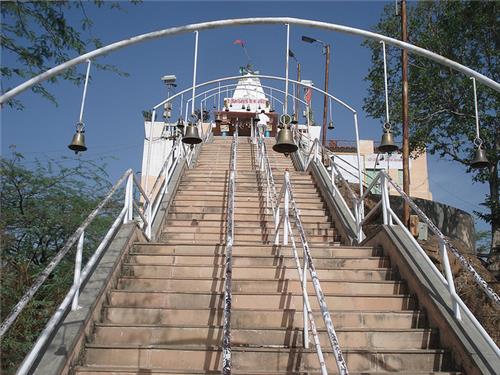 This is a small temple in the village of Narta, Bhimnal, Jalore District of Rajasthan. It is a Gautam gotra temple for a specific clan known as the Shrimali Brahmins. Every year, at certain times of the years that are considered holy, many visitors and devotees come to pay their respect in the temple. 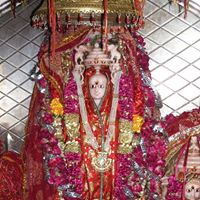 The temple is situated in Pallu, Rawatsar Tehsil. This tehsil is a part of the Hanumangarh District of Rajasthan. This is one of the few temples of Rajasthan where the temple is named after its location and not the other way around. There are two temples in the Pallu Wali Mata temple complex, one dedicated to the Hindu goddess Brahmani and the other one is dedicated to the Hindu goddess Kali. Both the temples are moderately popular and has visitors pouring in at all times.

Goddess Shila devi is another form of goddess Durga. The Shila Devi temple is a part of the Amber Fort in Jaipur. Like all other forms of Devi Durga, Shila devi is also worshipped on the days of Navaratri, especially on the sixth day of the auspicious nine days. It is believed that Man Singh I brought the idol from Jessore, which now lies in Bangladesh. It is also believed that the idol of Shila Devi was carved from the same stone from which the Dashabhuja idol was carved, the one that belonged to the Susanga Royal Family.

Situated at over 1220m in the Aravalli ranges in Jalore District of Rajasthan, the Sundha Mata temple is dedicated to goddess Chamunda, the Mother deity. It is considered to be a very sacred place and attracts devotees and visitors from all over Rajasthan and Gujarat. The temple is 900 years old, and is made from white marble. There are many old inscriptions in the temple, which are of both religious as well as historical importance. The first inscriptions that has been read date back to the 12th century and from then onwards the inscriptions record the history of the region.

The Tanot Mata temple is located in the Village of Tanot, close to Jaisalmer in Rajasthan. It lies very close to the Pakistan border and there are much folklore regarding the temple. Some say that during the Indo-Pak war of 1971, many bombs fell close to the temple but none exploded, and no bomb could fall directly on the temple. This is as far as you can go to the Indo Pak border.

Comments / Discussion Board - Famous Temples of Goddesses in Rajasthan