10 Must Buy Handicraft Items From Rajasthan

10 Must Buy Handicraft Items From Rajasthan

Rajasthan (literally: The Land of Kings) is the largest state in India. It is known as the vivacious, lively state located towards the west of India. Its colorful and traditional heritage owes extensively to its unique art and craft which are some of the most iconic in the world.

Historically, the Kings and Princes of Rajasthan were great connoisseurs of art and craft and it was under their patronage that this region developed as one of the unique handicraft capitals of the world. They had influenced the development of the handicraft industry of the state which produces today everything from textiles to sculptures and paintings which are so endemic to this region. The handicraft industry of Rajasthan is one of the largest in India and has a big export market as well. 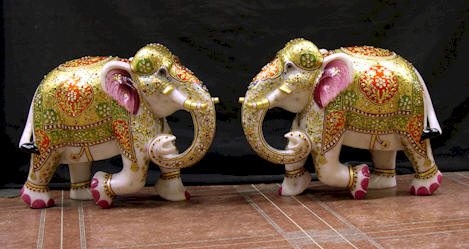 It is an intricate process of coloring metal surfaces with colorful and vivid designs.  ‘Mina’ refers to the feminine form of the Persian word ‘Minu’ which means heaven. In fact it specifically refers to the azure color of heaven. It developed under the patronage of Raja Man Singh of Ajmer who had invited five artisans from Lahore to Jaipur. This enamel art prospered and is quite famous all over the world. Today Jaipur meenakari represents one of the best examples of this form of work. Other centers in Rajasthan include Pratapgarh and Nathdwara. 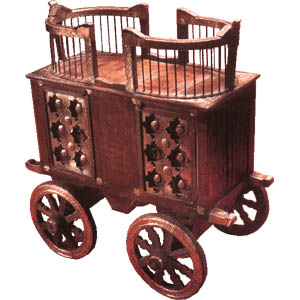 When talking about the handicrafts of Rajasthan we cannot but help but include the wood work which includes large furniture items to intricate and exquisitely carved wooden figurines. The larger items include old world door and window panels, jharokhas, tables, chairs, dressers, swings etc. Sometimes they can even be found with brass and copper sheets and pieces for decoration. Bikaner and Shekhawat are notable places for wooden furniture. Jodhpur and Kishangarh make the place for painted furniture pieces. Barmer is famous for producing figurines of Gods and Goddesses, animals, birds and human forms. Other mentionable places are Tilonia for its leather embroidered chairs.

Carpets and Dhurries in Rajasthan 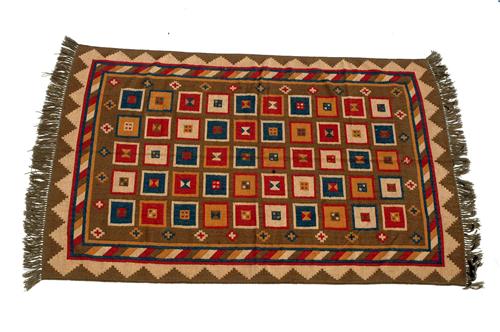 Source
Floor carpets, and handmade dhurries and delicate woolen druggets are popular export items. Dhurries are woven in many places in Rajasthan.  Jaisalmer and Bikaner are famous for dhurries made from camel hair. Jail carpets the so called carpets from Bikaner derive their name from the fact that they were made by prisoners during ancient periods. The carpets usually have geometric motifs with border and central designs. Much of the designs can be traced back to their Persian roots though they have been heavily localized through age and now feature peacocks and other local icons as well.

Textile and Fabrics in Rajasthan

Bright and brilliant colors in unique hues and tones make up a large section of the fabrics from Rajasthan. They include many different forms of block printing, batik, tie and dye methods. This form of handicraft shows a sheer diversity as ones moves from place to place. Hence each place has its own distinct style and design. Sanganeri has bright colors in floral patterns. Jodhpur and Sikar are well known for their tie and dye techniques. Some of the beautiful designs include chunari (dotted), lahariya (wave like diagonal patterns) and mothra (large dots). Bikaner, Jhunjhunu and Sikar are good places to find exquisite mirror work, embroidery and other appliqué which are used to embellish the fabric synonymous with Rajasthan`s traditional dresses. 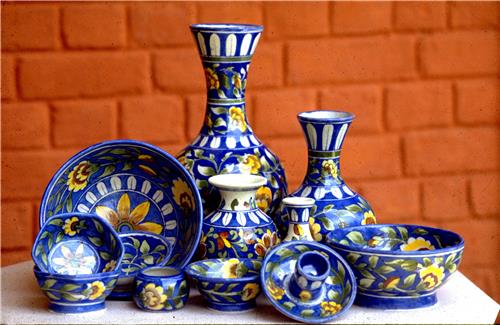 Source
Most famous of the pottery work of the region is the blue pottery which is popular for its exquisite work. Jaipur is noted for its blue glazed pottery which instead of using clay uses ground quartz, fullers’ earth. Molela a village nearby is famous for its clay figures of Gods and Goddesses and images for ceremonial purposes. Pokhran is known for its geometric design on white and red clay. Others include Alwar for its thin pottery pieces and Bikaner which has exquisitely lac painted ones.

Leather ‘Jootis’ or shoes are quite popular among locals and tourists alike. Jodhpur and Jaipur are quite well known even in the international scenario for these special shoes. Other usual items include bags, saddles and pouches. They are also used in furniture products for making seats and backings.
Gesso work, unique to the region of Barmer is made using the inner hide of camels. It is scrapped till the point where it becomes thin as paper and translucent and then used to turn into items like lampshades, vials, flasks etc.

Puppets and Dolls in Rajasthan 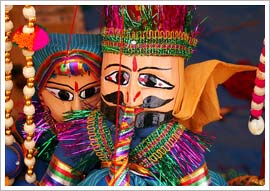 Puppets with wooden heads and stuffed sleeved bodies are iconic to this region. They are distinctly painted with arched eyebrows and mustache for males and colorful faces with nose rings and large expressive eyes for females. The puppets are colorfully dressed in bright and vivid clothes which are usually are usually embellished with sequins.

Stone and Sculptures in Rajasthan

The innumerable forts and fortresses say volumes about the workmanship of the masons and sculptures of the region. Religious themed statues make up a bulk of the stone sculpture work of the region. Stone carvers are numerous can still can easily be seen in many lanes of Rajasthan giving their touches to a piece of exquisite beauty. Dholpur and Barmer are known for their superb statues and frescoes for buildings. The intricately carved statues are famous the world over. Jaipur is famous for its statues of white marble of deities. 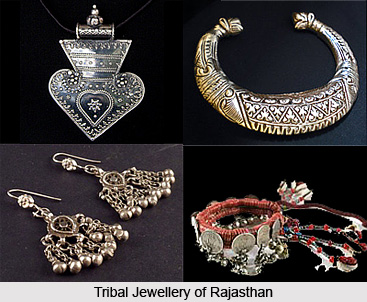 Perhaps no other area deserves as special a mention as the jewellery of Rajasthan. There are thousands of different designs and each endemic to a particular small region of the state. Rakhri, gokhru, jod, timaniyan, bala, bajuband, gajra etc are just a few of the traditional design names. Tribal womenfolk seem at ease wearing heavy simply crafted jewelry, the combined weight of which may even go above 5kgs! The men too can be seen in their chockers and earnings. Bangles made of lac and glass is quite popular too. The lacquer and filigree workmanship is simply put superb and unmatched.

With their origins in embellishing the royal armors of the fighting classes for war the metal workers have come a long way and now use their talents to adorn and embellish everything from tabletops, wall plates, and animal figures, caparisoned elephants and human poses on a howdah (a musical instrument) are unique to this state. Alwar, Jaipur and Jodhpur are famous for their metal work.
Rajasthan offers some of the best handicrafts in the world and for the discerning traveler it just might be a trip of their lifetime.