Monuments are an integral part of the rich cultural heritage of our land. When we think of Rajasthan, the first thing that comes to mind is the architectural opulence. It is a royal land and the monuments depict the grandeur of the royal past of the region. Although the state is most famous for its palaces and forts, but there are many other monuments that are hidden jewels. 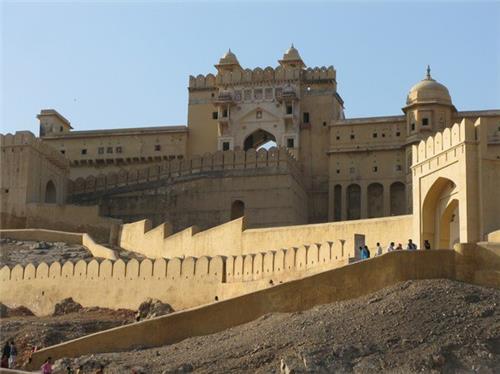 Your vacation to the pink city is incomplete if you don’t visit the beautiful Amber Fort. The fort is one of the most popular tourist attractions of the city. This is one reason that it has become a landmark and a unique identity of the city. The fort attracts millions of domestic and international tourists each year.
Amer Fort and Palace was originally built by Raja Man Singh in 1592 and subsequently developed by Sawai Jai Singh. The fort is situated in small town of Amer, just 1km from Jaipur. Located high on a hill, Amber Fort is built in marble and red sandstone. It is standing example of the royal past of the region. Although the exteriors have a rugged look, but the interiors of the fort are still in great shape. 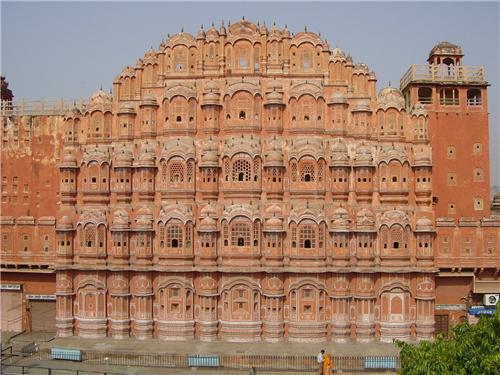 Hawa Mahal which literally translates to ‘Palace of Winds’ is the identity of Jaipur. Located in the heart of the city, it is one of the most famous tourist attractions of the city. The splendid palace is built in red and pink sandstone and is situated at the edge of the famous City Palace of Jaipur. It was built in 1799 by Maharaja Sawai Pratap Singh. The main aim of building Hawa Mahal was so that the ladies of the royal family could witness the street activities and hustle bustle while being unseen from the outside world. 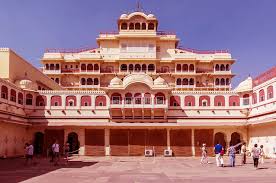 When in Jaipur, you cannot miss being at City Palace. It is one of the most famous palace and museum of the city. The palace complex includes Chandra Mahal and Mubarak Mahal. There is a wide collection of memorabilia on display that depicts the rich cultural heritage and golden past of the region. Govind Dev Ji temple which is dedicated to Lord Krishna is a part of the palace complex.
The palace was built between 1729 and 1732, initially by Sawai Jai Singh II, the ruler of Amber. The architecture of the palace is a fusion of Mughal, European and Rajput styles.
There are three main entrance gates to the palace - Virendra Pol, Udai Pol near Jaleb chowk and the Tripolia Gate. Tripolia Gate is reserved for entry into the palace by the royal family. Common people and visitors can enter the place complex only through the Virendra Pol and the Udai Pol. 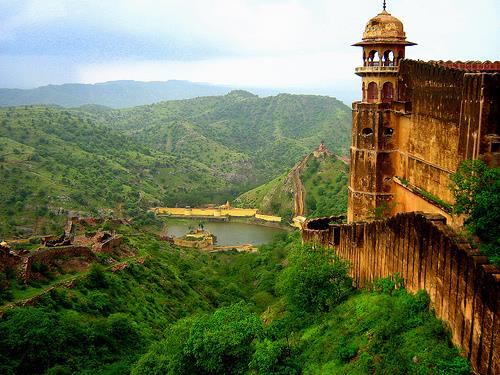 The famous Jaigarh Fort overlooks the picture perfect Amber Fort and Maota Lake situated near Amber. The fort itself is situated on Cheel ka teela (Hill of Eagles) of the Aravalli range.
The fort was built by Maharaja Jai Singh II in 1726 to protect the Amber Fort and its palace complex and was named after him. Jaigarh Fort is also known as Victory Fort. The structural design and architecture of the fort is similar to Amber Fort.
The fort features cannon named ‘Jaivana’, which was manufactured in the fort precincts and was then the world's largest cannon on wheels. 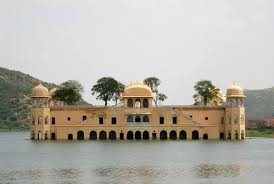 Situated right at the center of Man Singh Lake, Jal Mahal is one of the most romantic attractions of Jaipur. Perfectly amalgamating the Mughal grandeur and Rajput culture, Jal Mahal is known for its fine architecture. It was built way back in the 18th century. It is a five storeyed palace, out of which four are submerged in water. Jal Mahal becomes a splendid sight during the monsoons. It is rightly said that the palace is a delight for photographers and nature lovers. 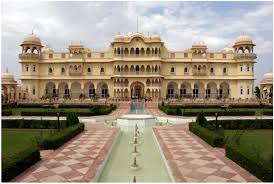 Nahargarh Fort is one of the many forts of the pink city. It literally translates to ‘abode of the tigers’.  Located on top of the rugged Aravalli hills, the fort was built by Raja Jai Singh in 1734. Experts believe that Nahargarh Fort was the first fort built by the king of Jaipur. The most popular section of the fort is Madhavendra Bhawan which was built by Sawai Ram Singh II. It is a popular tourist attraction of the city and attracts a lot of foreign tourists as well. 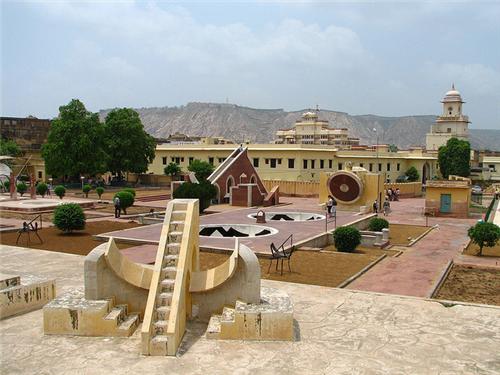 Jantar Mantar of Jaipur is said to be the largest observatories ever built. It was built by Maharaja Jai Singh II around 1720. It has various instruments that offer precise measurements of time, the azimuth, declination of the sun and the positions of constellations, along with several other astronomical phenomena. The structure also houses the world’s largest sun dial.
Jantar Mantar has fourteen major geometric devices for measuring time, tracking constellations and observing the orbits around the sun. It is a highly advanced astronomical structure and a popular tourist attraction of Jaipur city. 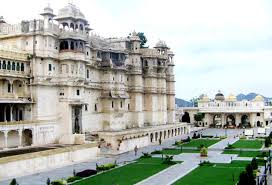 Located on the banks of Lake Pichola, City Palace is an architectural masterpiece. It is one of the finest palaces of Udaipur city and was built nearly 400 years ago. It is in fact the largest palace complex of the state of Rajasthan. Built on a hilltop in true Mughal and Rajasthani architecture, the palace gives a panoramic view of the entire city and Lake Pichola as well. The palace complex has been built entirely in granite and marble. The interiors of the palace complex with its balconies, towers and cupolas exhibit delicate mirror-work, marble-work, murals, wall paintings, silver-work, inlay-work and leftover of colored glass. 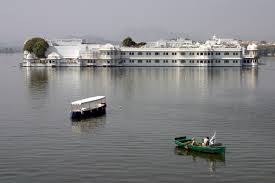 Lake Palace was built between 1743- 74 under the guidance of Maharana Jagat Singh of Udaipur. The palace was initially known as Jag Niwas Palace after its founder’s name. It was Maharaja’s royal summer palace.  Today it is one of India’s most romantic and finest luxury hotels. The palace is spread over an expansive area of 4 acres. The picture perfect resort and palace is a preferred choice for many destination weddings and film shootings. The famous Bollywood film Yeh Jawani Hai Deewani was also shot at Lake Palace Udaipur. 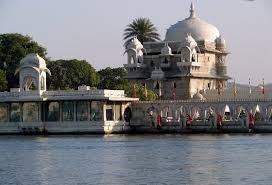 Out of the many tourist attractions of Udaipur city, Jag Mandir Palace is a popular one. It is located on the southern island of Lake Pichola. This splendid three-storied palatial structure is made in yellow sandstone and marble.

It was built in the early 17th century by Maharana Karan Singh and served as a hiding place for Prince Khurram, popularly known as Shah Jahan. 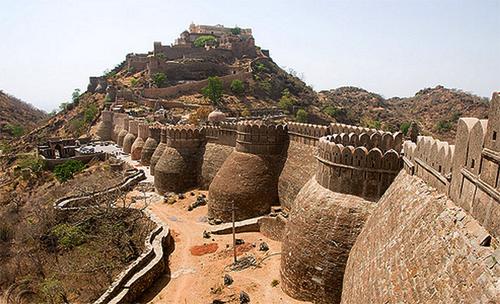 Kumbhalgarh Fort is a Mewar fortress in the Rajsamand district in Rajasthan. The fort was built in the 15th century by Maharana Kumbha. It is also the birthplace of the mighty warrior and great king of Mewar – Maharana Pratap. The main gate of the fortress, Hanuman Pol, contains a shrine and a temple to commemorate the great sacrifice.

The splendid Fateh Prakash palace is located on the banks of Lake Pichola and got its name from Maharana Fateh Singh. It is one of the most popular palaces of the Lake city and is known for its intricate architecture and detailing. The corridors of the palace are adorned with Mewar style paintings. The palace also houses the beautiful Durbar Halls, which is a sight not to be missed. 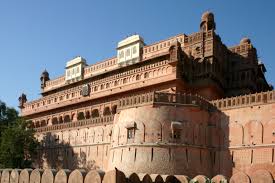 A treat for the people visiting Bikaner, Junagarh Fort is a must see destination. This architectural marvel was built by Raja Rai Singh in between 1588 – 1593 AD. The city of Bikaner is spread around the fort.

It is one of the major forts of Rajasthan that is not built on a hill. Junagarh Fort is spread over a sprawling area of 5.28 hectares. It is built in red sandstone and marble. The intricate carvings, beautiful pavilions, balconies and courtyards talk about the richness of Rajasthani culture and traditions. 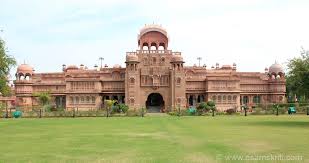 Another popular tourist attraction of Bikaner city, Lalgarh Palace was built by Maharaja Ganga Singh Ji in the memory of his father Maharaja Lal Singh Ji in 1902. The palace is built in red sandstone and is a fusion of Rajput, Mughal and European architecture. Some of the highlights of the palace are the carvings, filigree work, beautifully adorned courtyards and a huge collection of well-maintained paintings and trophies. 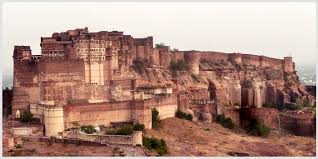 Talk of grandeur and you cannot miss the mighty Mehrangarh Fort. It is one of the largest and the most magnificent forts of Rajasthan. It is situated on a 150 m high hill. It was founded by Rao Jodha in 1459. The intricate carvings and detailed architecture is a proof of Jodhpuri skill and Rajasthani culture.

There are several palaces inside the fort with huge balconies and courtyards. One of the fort's palaces, The Moti Mahal or the Pearl Palace, has the royal throne of Jodhpur, the Sringar Chowki. Just 5km from the main city, one can easily reach Mehrangarh Fort via public and private transport. 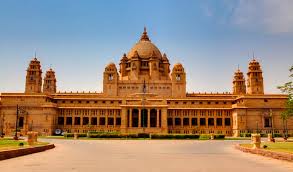 Umaid Bhavan palace of Jodhpur was built by Maharaja Umaid Singh and is named after him. It is an exemplary example of Indo-Saracenic architecture. Over three thousand artisans were employed in the construction of this palace.
The palace was converted into a luxury hotel in 1977. Today the entire palace has three segments – the royal residence, the luxury hotel and the museum. 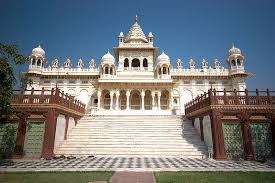 Jaswant Thada is situated on the left of the Mehrangarh Fort complex. It is a beautiful structure that is known for its traditional architecture. It is a 19th century royal cenotaph built in commemoration of Maharaja Jaswant Singh II. The entire structure is made from white marble is an example of architectural marvel. The beautiful jail work cenotaph is the other highlight of the picture perfect Jaswant Thada. 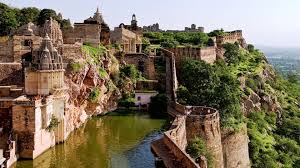 Chittorgarh Fort is the largest fort of the country in terms of area. The magnificent fort talks about the rich cultural heritage of the region. It sprawls over a hill 180 m (590.6 ft.) in height and is spread over an expansive area of 280 hectares (691.9 acres) above the plains of the valley drained by the Berach River. 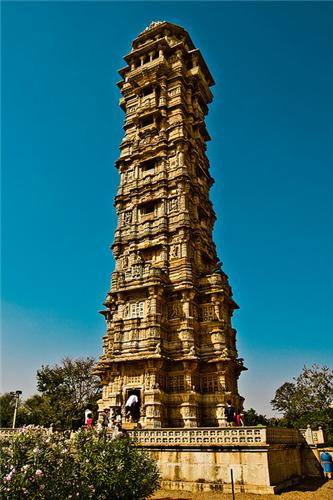 Vijay Stambh which literally translates to ‘Victory Tower’ is a famous tourist attraction of Chittorgarh city. This nine-storeyed 37 meters high structure was built by Maharana Kumbha in commemoration of his victory over the Muslim rulers of Malwa and Gujarat in 1440.

Since the fort camouflages with the yellow stretches of sand, it is also referred to as Golden Fort or Sonar Quila. Located in the heart of Jaisalmer city, it has become the unique identity of the city. 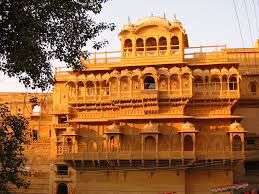 Patwon ki Haweli or the mansion of the brocade workers is one of the oldest hawelis of Jaisalmer. It is a fine example of the grandeur of the region and the glorious past that Jaisalmer had. With intricately carved pillars, corridors and chambers, the haveli is known for its beautiful architecture, especially the jharokhas or balconies.

This five storeyed hawelis is divided into six apartments – two are owned by the Archeological Survey of India, two by the families that run crafts shops there and the remaining two are private houses. 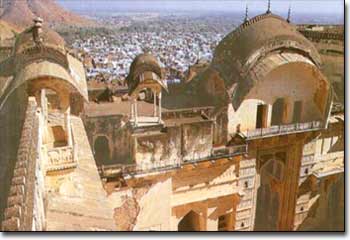 One of the most magnificent structures of Kota, Taragarh Fort is one of the many forts of Rajasthan. It is steeped in history and talks and about the royal past and culture of the region.

The fort was built in 1354 on a steep hillside. It is known for its architecture. There are numerous tunnels crisscrossing the entire fort structure. 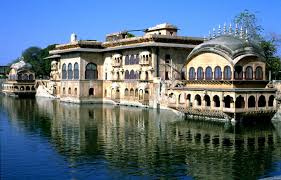 Situated at a distance of 34km from Bharatpur city, Deeg Palace is known for its opulent architecture and grandeur. Deeg was the first capital of the newly carved out Jat state. Deeg city is famous for its palaces, gardens and he ruins of Deeg Palace.