Weddings In Rajasthan- Rituals And Customs

Weddings In Rajasthan- Rituals And Customs 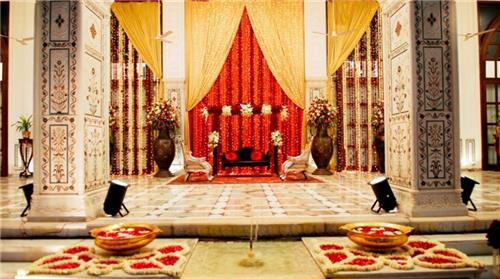 Rajasthani weddings are lavish and filled with umpteen numbers of customs and rituals. Basically the bride and the groom could be having an arranged marriage or even a love marriage, but these rituals remain constant. The wedding is all about fun, laughter, ceremonies and gathering of the loved ones. Blessings from the elders are sought and the ceremony goes on for at least 3-4 days. These include a list of pre-wedding rituals followed by post wedding ceremonies.

The sava or wedding date is fixed on the basis of matching horoscopes. The wedding period in Rajasthan usually includes the months of January and February. Then the wedding season commences again from mid May up to first 2 weeks of July. Post this, November or post Diwali is regarded as an auspicious time. Weddings don’t take place during August-October and 14th December to Jan 14th. A pre-wedding ritual called Roka is done to as a promise and tying the bride and groom in a pre-wedding bond. 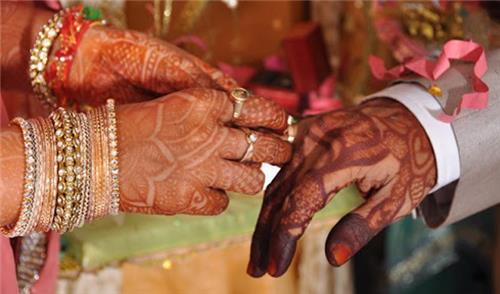 (Source: myshaadi.in)
This is also known as the tika or tilak ceremony. This usually takes place in the house of the groom or during an occasion like the sangeet or geet sandhya. Here the bride’s father along with other male relatives like the brother honor the groom with some gifts. The men also take gifts for other members of the family. The ladies do not accompany the men in this ritual but these days the custom is done with both men and women. The brother of the bride puts vermilion or tilak on the forehead of the groom. Sweets and fruits are gifted too.

This ceremony is all about honoring the Lord Ganesha and worshipping him. The dual puja takes place about 2-3 days prior to the wedding. A small havan or yagya is performed on both sides of the family. After the installation of the Ganesha, the main wedding rituals commence. The groom and bride are not allowed to leave the house post it, which again is not very much implied these days.

The pithi dastoor is also called the tel ban and it is done on the day of the wedding. On this day, the groom and the bride are applied turmeric along with sandalwood on the body. The pith is done to ensure that they are glowing and their skin is radiant. This is a vital ritual in the bride’s house and only married women of both sides do pithi dastoor. The bride is dressed in either yellow or orange colors. Four ladies, who must be of the bridal clan too, hold a canopy over the bride. Then 7 ladies take turns to apply this paste on the bride, along with the ones holding the canopy. The same thing is repeated in the groom’s house too. Auspicious songs are sung during the ceremony, wishing the bride a happy and blissful married life. Mehendi is also put on the hands and feet of both bride and groom. 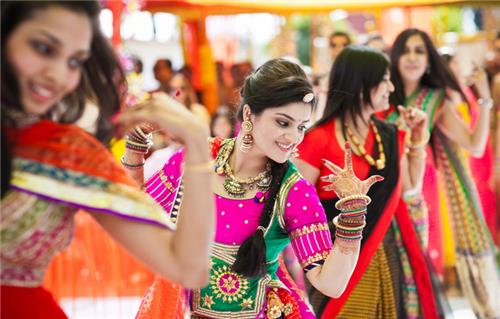 (Source: https://www.shaadimubarak.net.in/)
Mehfil is a very vital part of Rajasthani wedding and is nowadays referred to as the geet sandhya. In earlier times, the sandhya or the mehfil was all about gathering of men and women, who would be seated separately and would take place in a courtyard or open area. The traditional dances like the ghoomar would be performed. The womenfolk would dance inside in a separate enclosure or specialist dancers would be called for it. The tradition now has changed a bit as men and women sit together while there is a stage for performing ghoomar along with Bollywood dances. Both the bride and the groom’s family get together to perform a series of dances and stage plays.

Click on the video for songs in Rajasthani wedding 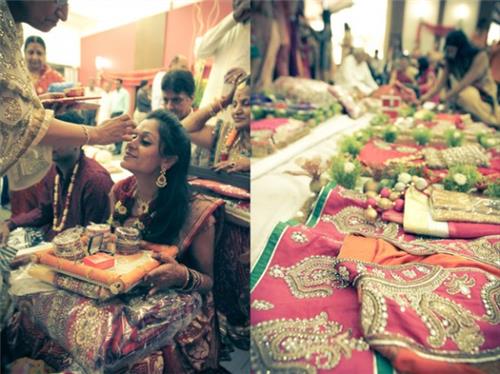 (Source: https://weddingcoindia.files.wordpress.com)
Maira or the Mahira is a ritual that is again performed by both the groom and bride. This is basically the ritual of the maternal uncle or the mama. Here the uncle comes to the house of the bride or the groom with a series of gifts and offers it to the relatives, bride, his sister and brother in law. The ceremony is basically a significance that the mama is sharing the expenses of the wedding and trying to help out in whatever way they can. 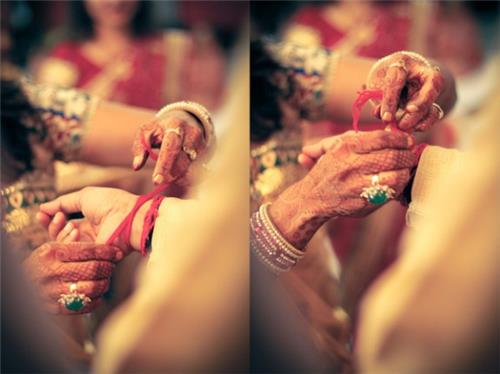 As per this ceremony, the groom has to be dressed up in all saffron and perform a ritual before putting an orange thread. The saffron outfit here is of acceptance of the marriage and the marital duties that lie before him. However, the thread is usually placed around the neck instead of the stomach, unlike brahmin rituals.

This is basically a custom where the grooms family sends many kinds of gifts to the bride and her family. It includes gifts and jewelry for the bride along with clothes, etc. But unlike the bride’s side, the groom's side sends gifts for the younger and unmarried family members. The custom is that the bride wears these clothes during the wedding or one of the wedding functions like the geet sandhya. 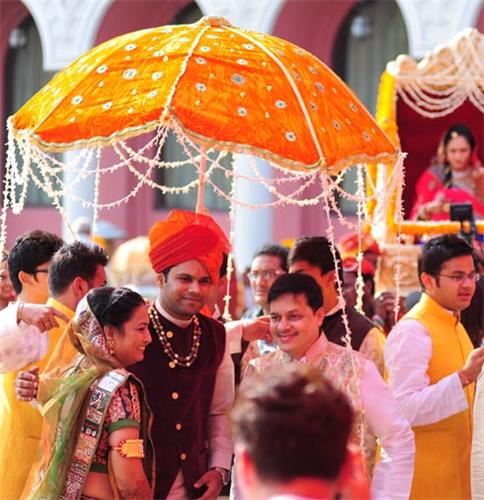 (Source: https://www.weddingsutra.com/)
Rajasthani weddings do give a lot of importance to the grooms side. In this ceremony the groom wears a turban or headgear called pagdi. This is basically tied by the brother in law of the sister or the Jija. He wears a few others things that are unique to Rajasthani wedding like kalgi, tani and pecha. Then he is made to wear a flower like structure around the turban that covers his face. The sister in law or the brothers wife puts kajal or kohl on the eyes of the groom. The sister also puts threads on the mare that the groom will sit on along with feeding the mare some jaggery for an auspicious start. Before heading to the wedding ceremony, the groom must visit a temple. Before this process, the bride’s family also comes to the grooms house and requests them to come for the ceremony or bring the baraat.

The bride’s house or the place of the wedding gate is decorated with the toran. It is a custom that when the groom comes to the house or the wedding area, he has to hit the toran using a neem stick to ward off evil. Once he enters, the bride’s mother comes to the door and does aarti along with tilak. She also makes an attempt to pull the grooms nose as a fun ceremony. If she catches the nose, then the groom will be mocked.

(Source: https://www.indianholiday.com/pictures/)
Unlike regular weddings, there are not seven rounds or pheras in Rajasthani weddings. Here three rounds may take outside, where the bride puts a garland around the neck of the groom and vice versa. She circles him thrice throwing flowers at him. Then the couple head inside to take pheras at the mandap, around the yagna. The grooms turban cloth is tied around the girls wedding ghaghra or saree, which is a symbol of eternal bond. Mantras are chanted and rituals performed.

Once the pheras are done with the groom puts vermilion or sindhoor on the brides forehead. It is a vital symbol of wedding and means that all the rituals of the wedding are completed. Some other steps that lie in between are-

In this step the bride has to place her foot on a grinding stone. Basically it is a symbol that the bride will be courageous and stand strong in troubled times. The brothers of the bride then also put puffed rice in the bride’s hand. This means that as the bride is entering the groom’s family, she will continue to wish well for the happiness of her brothers and maternal family.

The 'saptapadi' is basically the bride and the groom taking seven steps together. It means that till date, they were alone but henceforth they will be taking all steps together and in sync. They also utter different promises or the seven vachanas that are symbolic to all Rajasthani weddings. 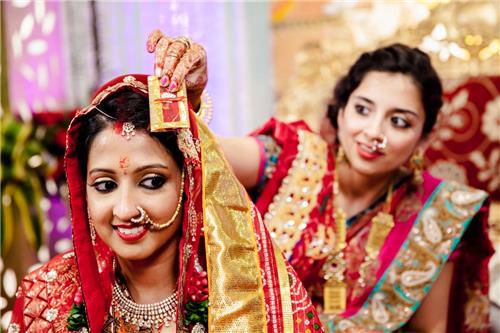 (Source: https://weddingphotosutra.com/)
In this ceremony the mother-in-law and the sisters in-law of the bride take charge. They basically comb the hair of the bride with love and make her wear a bridal dupatta. They also tie a religious thread around the bride’s forehead and bless her with gifts. This means that the bride is now a part of their house.

In this formality, the grooms father gives the bride a bag full of money along with some dried fruits and silver. It means that the bride should now take charge of the house along with her mother-in-law. The bride gives out this money to all her relatives and then gets on to seeking blessings from the elderly.

As per this ritual, the bride’s side, especially her sisters and younger brothers hide the shoes of the groom. In exchange the groom has to give them some money and then they return the shoes.

In this ceremony the groom is adorned and blessed by the elders of the bride’s family. He is given gifts along with putting tilak. The eldest member of the groom's family is given a silver bowl or kachola. Songs are sung for the bright future of the bride and groom. 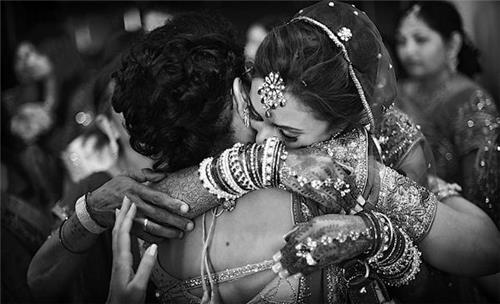 (Source: https://krsnamusic.com/)
This means that all wedding rituals are over and the new bride should head to her husbands house. She is given a coconut in a small silver bowl, though in earlier times only a coconut was placed under the wheels of the cart, carrying the bride.

Once the wedding ceremony is over the bride heads to her new home. Here she is welcomed with love and warmth. Aarti is done along with some rituals like shifting plates without making a noise and tossing a bowl full of rice as she enters the door. The groom's sisters block the door to the room and ask for gifts and money to give way.

This is also addressed as the ‘mu dikhai’ function. Here the bride is made to sit with a veil and the elders of the groom’s side come to see and appreciate the beauty of the bride. She is then given lavish gifts like jewelry and silver. 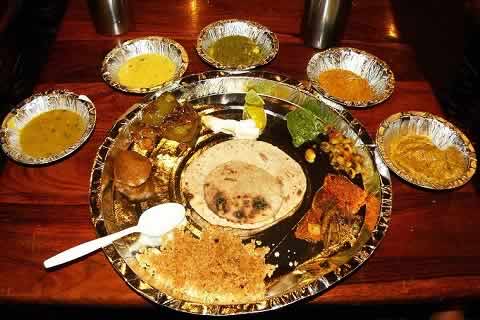 After this ceremony, the bride is made to eat from a plate that she shares with seven other women. This is a symbol that she will live in harmony and peace with other family members. Then she is taken to the temple to seek the blessings of the gods. Jua or fun games are played between bride and groom. A ring is placed in a bowl full of water thrice. Whoever finds it most times wins the game and is said to be the dominating partner.

In this ceremony, the bride goes back to her maternal home for dinner. The groom is expected to come to pick her back. This is basically done because the new bride misses her family and she goes there to dry her wet hair, while spending time with her family.