Ancient Art and Craft of Rajasthan

Ancient Art and Craft of Rajasthan 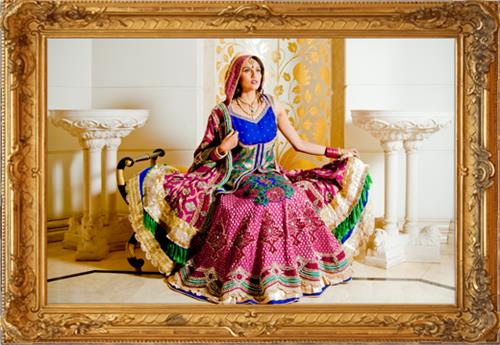 India is a country rich in cultures. Each and every part of India has their own traditions and techniques to be proud of. These traditions encompass art, music, and food. Rajasthan is one of the richest states as far as tradition and technique is concerned. They not only have some indigenous traditions but also display the influence of several dynasties that have ruled the place over the years. Each of these traditions has an interesting background story associated with it that makes it even more appealing. Here we take some time to get into some of the traditional art forms of Rajasthan in details.

Whenever someone comes across the word art, they generally associate paintings or sculptures with it. However, art is not limited to that only. The first Rajasthani art form that becomes the center of attraction of this discussion is a form of embroidery known as Gota. There are painting styles as well, which are indigenous to Rajasthan, like Phad paintings. There are many other folk painting styles that might be common to other sates of India as well, and has been in practice in Rajasthan for a long period of time. Getting to know all these different forms of art will let you know more about the existence and essence of Rajasthan. 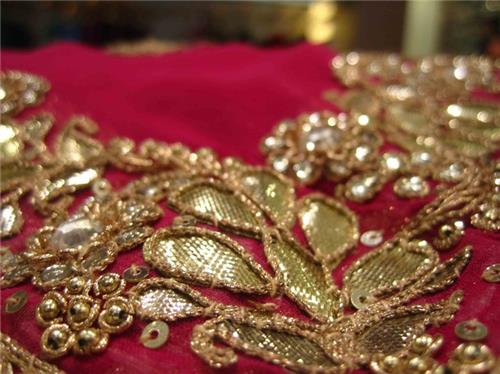 Gota embroidery is a special style of embroidery that does not employ the traditional weaving techniques, but uses appliqué technique instead. This kind of embroidery has been in existence for a long period of time, and all the royal families of Rajasthan and the Mughal Dynasty have worn dresses with Gota embroidery. Even till date Gota embroidery is widely used, mainly in festive dresses and bridal outfits. It is a timeless form of art that is bound to impress anyone that sets their eyes on it.

Gota is a form of metal embroidery, where traditionally gold or silver laces, also known as zaris, were weaved into the edges or borders of dresses to make them glamorous. With the passing years, there have been many changes but the beauty has never diminished. Instead of gold or silver, which are expensive to say the least, other metals have been sued for embroidery. Also the patterns and designs that were traditionally embroidered onto the edges of the clothes are now used in almost all the places of the dress. There have been some changes in the weaving technique as well. 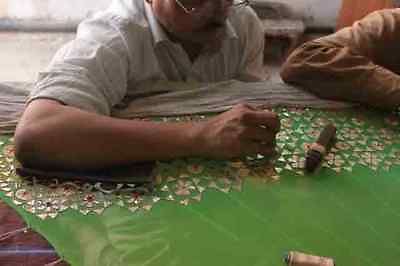 The Elaborate Process behind Gota

There are several complex steps that take place to make a Gota embroidered cloth. Firstly, the metal arrives in rolls and has to be beaten into shape, rolled out and/or cut to the desired shape and pieces. This is done in the traditional fashion using an instrument called the kutan pitan. There are many designs, patterns and motifs that can be drawn using this embroidery technique. Traditionally, fish and bird motifs were widely used. However, the varieties in designs and patterns have changed a lot in the recent times. So deciding on the design is another important step in this process.

After the design has been finalized, the next step is to put down this design on the fabric. There is a wide choice of fabrics, including georgette, silk and bandhni. The fabric, whichever one is chosen, is put t a wooden frame. There are expert designers who then draw the designs onto the fabric. This is done using wax paper, stencils or tracing paper. Sometimes kerosene and lime is used to put down the design. This in itself is a lengthy process. The whole system of Gota embroidery is done completely by hand and employs great skill.

This kind of embroidery is used in all kinds of dresses. In the beginning, it was used in lehangas and cholis primarily. Contrary to popular belief, the lehangas were worn by men and women alike in the old days. From then onwards, the embroidery work has been displayed on a wide variety of dresses. The most mentionable are sarees, supattas, salwar kameezes etc. It is interesting to note that all these are specifically women wear. Now there is also a tendency to bring this kind of embroidery to the mass market, so some compromise is done on the quality of fabric and metal.

Sometimes some cut stones and similar glossy and glamorous materials are used in the embroidery. Both the actual cloth and the person who wears it look absolutely ravishing. That is why this embroidery work has been so popular for such a long period of time. 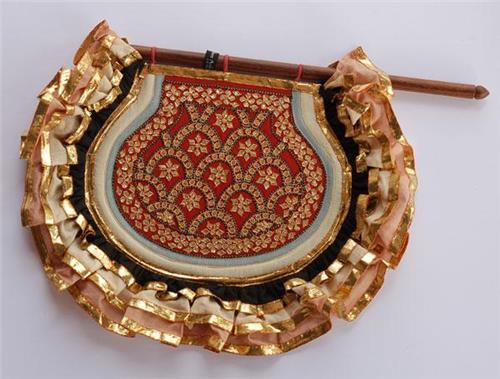 Phad is the painting style that comes from Mewar District of Rajasthan. Phad is a form of scroll painting. In scroll painting, some story is depicted through pictures on a long piece of cloth or paper. In case of phad paintings, the long piece of cloth used is known as phad. This is also a form of folk painting from the state of Rajasthan. In phad paintings, generally the stories of deities like Pabuji and Devnarayan and the mythological stories related to them are depicted. The paintings have vibrant colors and great themes. You can see the same being depicted in the gorgeous sarees and kurtas that are now made in the gota style. Traditionally too, these paintings would use gota embroidery on the sides for added glamour. 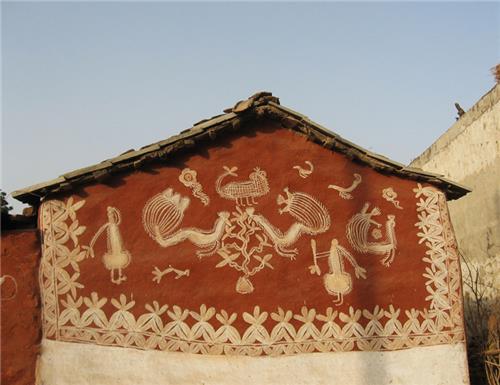 This is a form of wall and floor painting. This form of painting is not indigenous to Rajasthan, and is found in Madhya Pradesh as well. However, it is traditional in Rajasthan. It is made from chalk solutions and red ochres. The paintings mostly comprises of patterns and symmetric designs and rarely motifs. These drawings are made on auspicious occasions, traditionally by women. It takes great skill, and is a popular form of folk painting. They are taken as symbolic representations of the presence of gods and goddesses and their presence. All festivals and get together occasions are marked with such paintings. 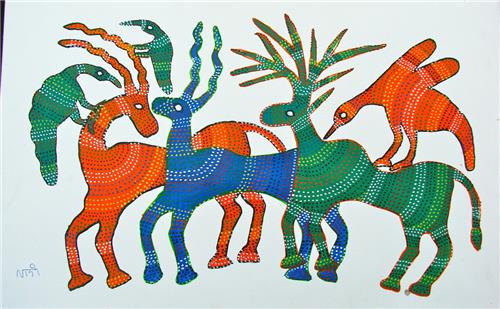 Bhil is another folk painting that is common to Rajasthan and Madhya Pradesh. Bhil is a tribe in Rajasthan, and there form of painting is also known as Mandana, although they are quite different from the Mandanas that have been described above. These are mainly wall paintings that depict natural things like tress, birds, animals etc and have nothing to do with religious themes. However, at times gods and goddesses are depicted in these paintings at times as well. This kind of paintings takes a bit of setup as well. Firstly, the wall has to be coated white, and then the painting can begin. Mostly men do this kind of paintings. Today you can see many fashion designers drawing inspiration from these and using them in different thread motifs combined with gota to revive the trendy in a contemporary and chic way.

Although they are not known as tattoos, body paintings are quite popular in Indian culture as well. A Gudna motif is one such class of body painting. In this kind of painting, first a needle is used to pierce the skin and then soot black is used to paint the motif. It is not only a form of art, but also a mark of identification that helps in differentiating people of different tribes. Both men and women indulge in body paintings and these tattoo forms are now depicted in the different forms of modern gota embroidery.

There are many other traditional painting forms popular in Rajasthan. However, not all of them are well studied, researched and published. This is a jest of just some of the popular and well known forms, and a background story with details of their origin. It should be enough to inculcate interest in the subject.