Entertainment and Nightlife in Rajasthan

Entertainment and Nightlife in Rajasthan

Considering the fact that Rajasthan is a popular tourist destination and attracts a lot of people, it has a wide variety of entertainment options. Sit back and relax amidst the winds of the majestic Thar Desert or soak in the royal feel of the forts and palaces - Rajasthan has something for everyone. 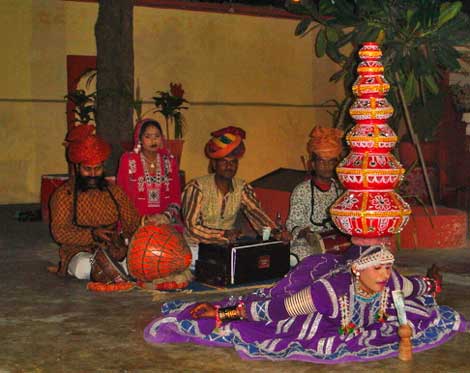 There was a time when nightlife was synonymous with metropolitan cities. But with the changing times and evolving lifestyle of people, even smaller cities have ample options for entertainment and nightlife. The good thing about the entertainment of Rajasthan is that it is myriad. The state attracts tourists from all over the world, catering to the altering needs of the people. The rich cultural heritage of the region is entertainment enough! Kalbelia dance, folk music, puppet shows and the list goes one! You are in for a treat in Rajasthan.

Rajasthan is one of the few privileged states in India to have some of the prestigious clubs of the country. These clubs are notable not only because of the facilities it offers but also the rich legacy behind them. Some of the clubs are honored to have foreign dignitaries as guests in their clubs. 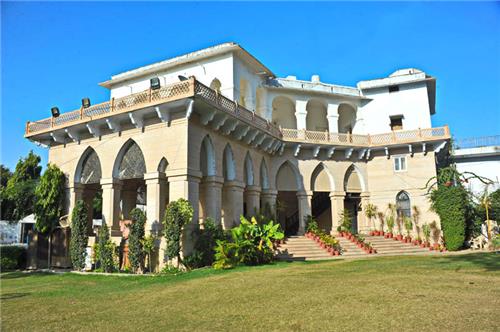 (Source: Official Website of Ajmer Club)
This is one of the most popular clubs of Ajmer in Rajasthan. Ajmer has a billiards table, pool table, licensed bar and a card room other than the general facilities like gym, health club, beauty parlour and restaurant. 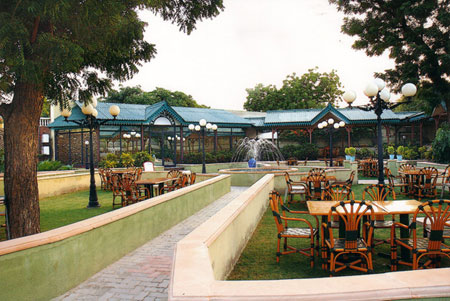 Umed Club in Jodhpur is a place which has activities for all age groups. One can relax and rejuvenate in the cozy surroundings of the club. With the latest treadmills and bicycle machines one can work out to lose weight or tone body muscles. 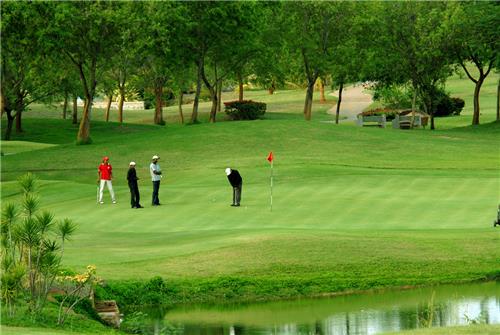 (Source: IGTA)
Rambagh Golf Club has a rich history. Its founder Rajamata Gayatri Devi is also the Lifelong  Captain of the Club. The club is affiliated to Indian Golf Union and a number of national and international tournaments are held regularly.
Contact
Bhawani Jai Singh Marg, Jaipur
Phone: (0141) 443421

Originally named the Jaipur Polo Club, it was formed in 1918 with players from Jaipur and Jodhpur. The rich heritage of the club is seen from the fact that many foreign dignitaries including The President & Prime Minister of USSR, Mrs Jacqualine Kennedy,  Queen of England & Prince Phillip, Prince Charles and Princess Diana, King of Jordon visited the club.

Some of the other clubs of Rajasthan are: 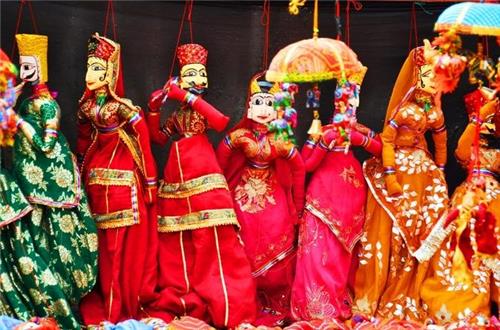 Puppet shows are an integral part of the rich culture of Rajasthan. Puppetry is one of the most famous traditional forms of entertainment in the region. It is popular even today, especially among foreign tourists. Folk tales and social causes are primarily focused through puppet shows. The epic tale of Mahabharata is also depicted through puppetry. Puppets also make a great souvenir for people who want to take back a part of Rajasthan with them.

It is encouraging to see that the artisans of Rajasthan are taking this art form forward. Today puppetry is used as a medium to educate as well. NGOs and social welfare organizations use puppetry as a medium to make people aware about issues like immunization, sanitation, girl child education etc.

One can find reference of this traditional art form in folk tales, ballads and even folk songs of Rajasthan. A religious festival, social gathering and village fairs are considered incomplete in Rajasthan if there isn’t a puppet show. The costumes are traditional so that people can relate to the overall theme. Jaipur and Jodhpur are the main centres where these puppets are made. Apart from being a source of entertainment, puppetry was used as a medium to educate the masses as well. Some of the most common topics taught puppet shows include – dowry system, women empowerment, cleanliness and illiteracy.

Rupayan Sansthan of Jodhpur and Bhartiya Lok Kala Mandir of Udaipur are two organizations that are doing great work in preserving and promoting Kathputli. 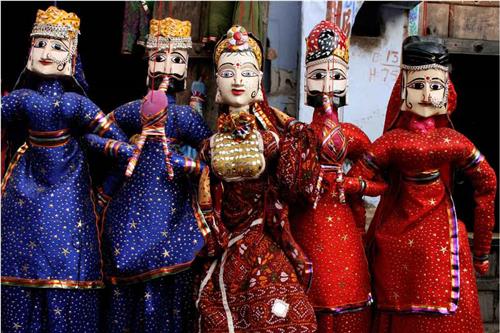 puppetry in Rajasthan. It is managed by a single string that passes from the top of the puppets. The height of these puppets isn’t much usually one and a half feet and are mostly manufactured in Sawai Madhopur, Udaipur and Bari. Though there isn’t any particular theme that these puppets portray but there is a main dancer called Anarkali which has four strings attached so that the puppet can move its limbs. The Bhatt community makes these puppets and organizes puppet shows during the dry season. A snake charmer is also sometimes an important attraction of the show. 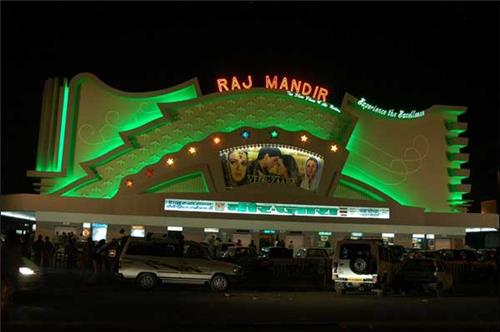 The two things that bind our country into a thread of unity are – cricket and Bollywood. Rajasthan is a loved tourist destination and in addition to that it is also a very popular destination for movie and TV serial shootings. The picture perfect locales of this princely state give a magnificent backdrop.
With the advent of technology, several small cities in the state of Rajasthan have also seen the multiplex boom. But mostly multiplexes are still limited to major cities like Jaipur and Jodhpur. The other small cities and towns are still in the single theatre phase.


Dance and Music Shows in Rajasthan

(Source: Umaid Bhawan)
Dance and music has always been an important part of the culture of any region. Rajasthan is known for its folk music and dance. Kalbelia and Ghoomar are the two most popular dance forms of the state. Each region of the state has many folk artists who earn their livelihood through dance and music. A large number of resorts and hotels in Rajasthan organize these dance and music programs to entertain the guests. Rhythm of Rajasthan is an initiative that aims to collaborate various folk performing artists of Rajasthan. Over the past 10 years the brand has grown manifolds and has made a mark for itself.


Sound and Light shows in Rajasthan

We all want to run away from the hustle bustle and chaos of the concrete jungle for a vacation. The rustic feel of Rajasthan is a great way to explore the rich culture and heritage of our country. The serene lakes, mighty forts and palaces, enchanting hawlis and the irresistible Thar Desert are some of the highlights of the region. Tourists and travelers enjoy sound and light show in various parts of Rajasthan. Some of the most popular sound and light shows of Rajasthan include the following.

Your trip to Jaipur is considered incomplete if you don’t visit the picturesque Amber Fort. It is known to be the Pink City’s most famous tourist attraction. The light and sound show at Amber Fort is one of its kind experience. It is held at the Kesari Kyari complex of Amber Fort. 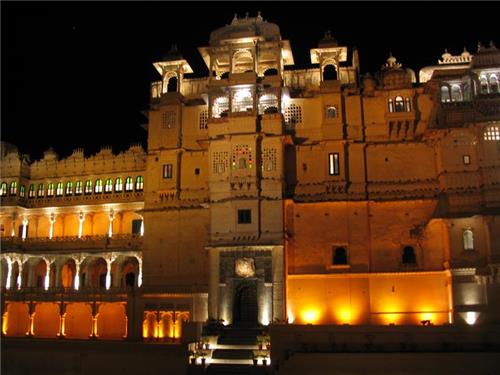 The sound and light show at Udaipur City Palace is an experience that you’ll cherish for a lifetime. The sheer opulence of the palace is a great backdrop for the show. The entire history of Mewar region is narrated in a classic way, thus, giving the visitors a glimpse into the glorious past of the region.
The show is divided into 12 episodes, the narrative traces 15 centuries of history that includes the foundation of Mewar by Bappa Rawal, the 'Johar' of Chittor's Rani Padmini, the story of Mughal emperor Humayun and Rani Karmavati, the story of Pannadhai who sacrificed her own son for the safety of Prince Udai Singh and the battle of Haldi Ghati.